We have just framed this Scottish Women’s International Football Shirt and Cap for Sophie Howard’s uncle. It has been signed by the entire team.

Sophie was selected to play for Scotland in for their FIFA Women’s Football World Cup qualifying match against Switzerland in August 2018 and her proud uncle came to us to frame both the shirt and the cap together.

his did pose a challenge, as the cap was quite difficult to frame and we had to use a very deep plain wood frame and hand paint it as this was the only “off the shelf” frame that was suitable.

The shirt and cap sit right at the back of the frame and the mount to the very front, supported by pillars of foam board.

The two photographs at the bottom, were both float mounted and supported by blocks of foam board raising them from the backing card and giving a very vice shadow effect. 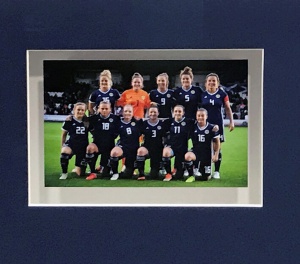