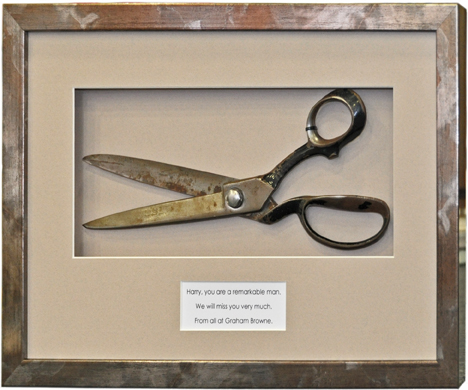 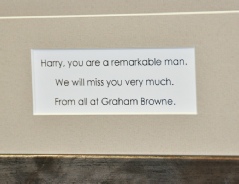 These scissors were framed for Graham Browne Tailors to be presented to Harry who is retiring, aged 90.

Apparently he is only retiring as he is fed up with the daily commute.

The chosen frame matched the patina of the antique scissors with a heavy metalic feel. The frame was deep enough for the scissors which we mounted on a sympathetic coloured mount card with a matching window mount set forward against the glass so that the viewer looks into the depth of the frame to see the scissors.

We added a small aperture with a dedication to Harry.

The scissors are over 100 years old and Harry has used them throughout his time as a tailor.

Here is a link to Graham Browne’s web site

Daniel, from Graham Browne Tailors, was kind enough to leave us the following feedback;

If you would like to see more customer reviews, please see the testimonials tab on the top navigation bar or follow this link: Testimonials.