Massimiliano Longo oil portrait on board

Massimiliano Longo is a painter who lives in Venice but has a number of galleries that exhibit his work in England,one of which shows his work at exhibitions across the world.

As with many creative people, fabulous artwork can be created with limited consideration to the difficulties that may be presented in displaying the artwork at it’s best advantage. As our creativity is not restricted by the usual limitations of framing we have always found a way of accommodating whatever has been produced.

This piece was painted on board, but had a wooden supporting structure which gave it depth. Massimiliano wanted it to match the paintings on paper and so we framed it with the same moulding but made the frame upside down, pinning the frame together from what would normally be the front. This allowed us to rest the painting inside the rebate of the frame leaving approximately 5mm gap all around the frame between the picture and the frame. We then spray painted the back (now the face) of the frame to match. Thus it was similar to a “float frame” but it matched the frames of the works on paper.. 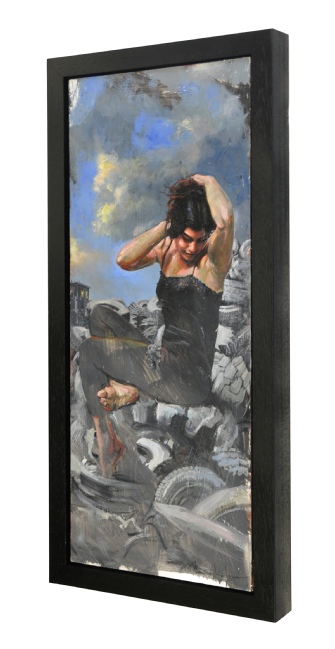